Windsor Corporate Challenge is proud to support the Fight Like Mason Foundation! 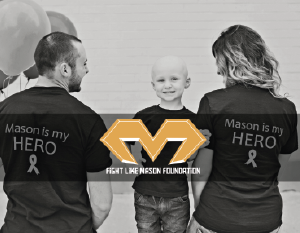 The Fight Like Mason Foundation is a non-profit organization formed by Iain Macri and Chantelle Bacon, parents of Mason Bacon-Macri. Their son, Mason was diagnosed with Rhabdomyosarcoma (a form of childhood cancer) on May 4th, 2015 at the age of 2. Mason fought this terrible disease head-on, like a superhero, because he was a superhero. On June 27th, 2016, Mason beat cancer, not in the way everyone had hoped, but he beat it.
Iain and Chantelle thought they would do Mason no greater honour than to carry on his name, his way of life and legacy in the form of a foundation. They decided to turn their life-shattering tragedy of losing a child into something positive. With their experience, they pledged to change and make a difference, to give these kids a chance to fight just like Mason did.
The Fight Like Mason Foundation’s mission is to improve treatment, care, quality of life and awareness of patients diagnosed with childhood rhabdomyosarcoma and other childhood cancers. The Fight Like Mason Foundation has four primary programs; Mason’s Power Poles, Mason’s Super Soldiers, Mason’s SuperBuddies and Defeating the Villain for Good.
Mason’s Power Poles
The Fight Like Mason foundation provides customized IV poles with vibrant colours and have Superhero/Character toppers or Mason’s Power Poles, to all children in the Windsor-Essex community that require IV transfusions or require a mounting system for feedings in their home. Mason’s Power Poles are aiming to remove the hospital feeling from the home and give children a positive symbol in their home to look up to. They give them something to let the world know how brave and special they really are while they battle life-threatening illnesses.
Mason’s Super Soldiers
Being in the hospital is never a great thing for anyone, especially kids. Mason’s Super Soldiers are a group of professional cosplayers who pride themselves on having top-notch suits, understand what these brave children are going through and let them know how strong and brave they are. Mason’s Super Soldiers providing monthly realistic Superhero experience to children and families in our local pediatric unit.
Mason’s SuperBuddies
Mason’s SuperBuddies are hyperalgesic beanie babies which are donated to Essex-Windsor EMS and provide comfort to children who require paramedics services. Often times these are scary situations and it is the foundations hope that these Beanie Babies heroes give our little heroes a reason to smile.
Defeat the Villain for Good! 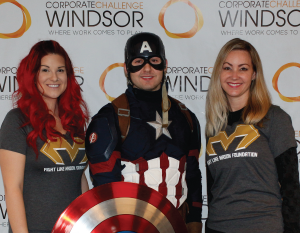 The Fight Like Mason Foundation donates raised funds to research institutions and/or research programs focusing on newly developed treatments techniques, drug targets, specifically for childhood rhabdomyosarcoma. Childhood cancer only receives 4% of the overall funding from the National Cancer Institute (NCI). These children deserve a cure and the only way that is going to happen is to put money into specific research programs and projects that share this common goal. The Fight Like Mason Foundation has partnered with C17 Council and Childhood Cancer Canada to assist in finding novel research to individually assist in funding a specific promising project. The research is followed by the foundation and updates are provided to their donors throughout research progress.

The Windsor Corporate Challenge is proud to support the Fight Like Mason Foundation with this year’s event. All net funds raised by the Windsor Corporate Challenge will be directed to fund Mason’s Power Poles and their Super Soldier and SuperBuddies programs. Additionally, the Fight Like Mason Foundation provides funding for research programs which focus on newly developed treatment techniques and drug targets specifically for childhood rhabdomyosarcoma. Learn more about this wonderful organization by clicking here.

The Windsor Corporate Challenge is proud to support the House of Sophrosyne and their new building with this year’s event. All net funds raised by the Windsor Corporate Challenge will be directed to the Family Bedroom and Child Care Room in our Building for Recovery Capital Campaign. These rooms will allow women to seek the treatment they need while caring for their children. Learn more about this wonderful organization by clicking here.

From 2012-2015, all net funds donated to The Windsor Corporate Challenge were donated to the Sunshine Foundation. The total amount of donations over the first 4 years of our event were over $449,000! The Sunshine Foundation was established in 1987 by a London, Ontario police officer as a legacy to his son who passed away from muscular dystrophy. He wanted children like his son to be able to live their dreams. In October of that year, the first Sunshine DreamLift flew 203 children from London to Walt Disney World® in Florida.